Jelling and the Danish Runestones

About 260 Danish runestones from the Viking Age are known, which were raised from about 800–900, until around 1025. It is thought that the tradition of raising runestones for deceased relatives possibly originated in Blekinge (which was a Danish territory at the time), where at least 4 runestones were raised by a local warrior clan during the 6th and 7th centuries.

One feature most Danish runestones and other inscriptions have in common is the use of the long branch variant of the Younger Futhark, as opposed to the short twig variant used mostly in Norway and Sweden. A number of Danish runestones mention high ranking persons such as Thul or Godi (political/legal and religious posts). The majority of the stones are unornamented, with their runes in vertical or horizontal bands changing direction at the end of the lines (boustrophedon or ox-turning-style). Occasionally, images such as faces/masks were added, but are typically not integrated with the text to the extent that later Swedish runestones exhibit.

An example of a “typical” Danish Viking Age runestone is known as Gørlev 1 (DR 239) from about 800. The first part of the inscription is a memorial formula “Þjóðvé raised this stone in memory of Oðinkárr” and is followed by the magical formula “Thistle, mistletoe, casket” (þmkiiissstttiiilll). The runes are in straight vertical bands and there is no ornamentation on the stone. A later example is the Asferg stone (DR 121) from around 970–1020, whose unornamented rune band reads: “Þorgeirr Tóki’s son raised this stone in memory of Múli, his brother,” again, a straight-forward memorial formula.

Then, in the mid-10th century, the most well-known runestones in Denmark and perhaps in Scandinavia, were raised: the Jelling stones. The older of the two stones, Jelling I (DR 41), was raised by King Gorm the Old in memory of his wife Thyrvé, and is thought to have been carved around 950 and like most Danish runestones, consists of unornamented vertical rune bands. Jelling II (DR 42), the more famous of the stones, was raised by King Harald Bluetooth for his deceased father Gorm and mother Thyrvé. The inscription goes on to state that Harald “won for himself all of Denmark and Norway and made the Danes Christian.” In addition to the inscription, which runs left to right and top-to-bottom like a page in a book, the stone is richly decorated with a four-legged beast (possibly a royal lion) battling a serpent on one side, and Christ with outstretched arms interwoven with vines, symbolizing the Tree of Life and also referencing the World Tree from Norse mythology. Although the style of the ornaments is unique, the inclusion of zoomorphic decorative elements would set a precedent to later runestones, particularly in Sweden. Thus King Harald’s Jelling stone is of prime significance as a historical source for the conversion and the development of the runestone tradition in Scandinavia. 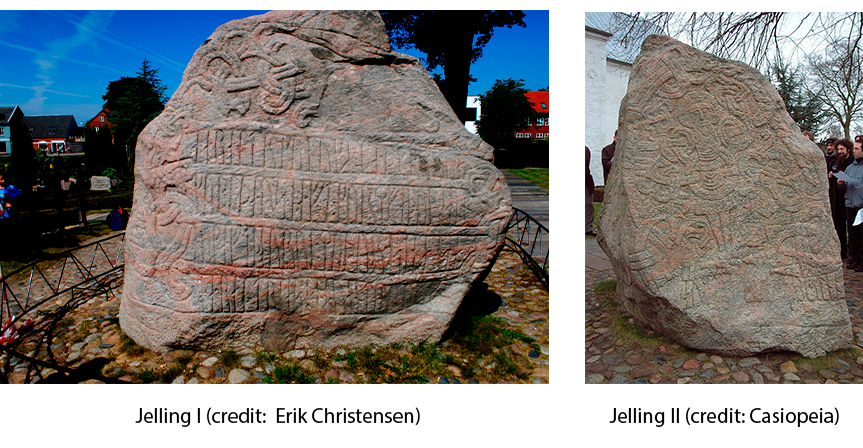